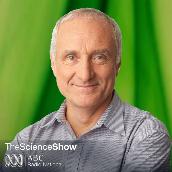 Water found on the moon

Scientists have confirmed the presence of water on the moon. Rather than occurring in rivers or lakes, water is found sparsely mixed amongst rocks. It's suggested the water came from comets, or the combination of incoming protons with oxygen. Jonathan Nally described the latest experiments where spacecraft will be sent crashing into the lunar surface, sending up plumes of dust, which will be analysed for further evidence of water. Download the audio or view the transcript of this ABC radio interview.